Your hotel in the center of Barcelona

In the Eixample neighbourhood, the financial center of Barcelona, our hotel is located just minutes from La Rambla, the Puerta del Ángel and Paseo de Gracia. And do not miss other attractions in Barcelona such as la Sagrada Familia, Güell Park, el Palacio de la Música and the Casa Milà (La Pedrera).

If you want a hotel in the center of Barcelona, Zenit Borrell is the hotel for you.

ACCESS HERE BY CAR: Entering Barcelona on the A7, cross all of Avenida Diagonal until Plaza Francesc Macia. Cross the square, access from the side of Diagonal and turn onto Villarroel Street (first right). Go straight down this street for 7 crossings and turn right onto Mallorca street. Then turn right at the second street and you will be on the Comte Borrell street. Immediately you will see the Hotel Zenit Borrell.

ACCESS HERE BY TRAIN: From Barcelona Sants, you can walk to our hotel in central Barcelona. Walk along Provenza street until the junction with Comte Borrell street where the Hotel Zenit Borrell is located.

By subway: from the Sants station, take the blue line metro at Hospital Clinic stop and get off at Comte d’Urgell stop. Turn down Rosellon street and then immediately down Comte Borrell street to where our hotel is located.

By Bus: Take bus number 44 next to the east entrance of the station. Get off at Valencia Street stop on the corner of Comte Borrell street and walk about 50 meters until you arrive at the hotel.

ACCESS TO HOTEL BY BUS: From the Nord Station you can take the metro. Walk as far as Arc de Triomf, take line 1 (red), in the direction of Hospital de Bellvitge and get off at Hospital Clinic. Exit by Urgell, turn onto Rosellón street and then immediately down Comte Borrell street until you reach the Zenit Borrell hotel in the center of Barcelona.

By bus from Nord Station. Take bus 54 in the direction of Plaça d'Eusebiguell, get off at Clinic Hospital and walk to our hotel in the center of Barcelona, Zenit Borrell.

ACCESS TO HOTEL BY PLANE: Exit the terminal at Barcelona airport and you will find the bus stop (A1 terminal 1 - A2 terminal 2) that will take you to the center of Barcelona. Get off at Gran Vía stop / Urgell stop and walk to the Zenit Borrell hotel.

To go from Barcelona airport to the city center, you can also catch the train. At the exit of the terminal 2 (if you reach the terminal 1, there are buses that connect the terminals) take the R2 line to Sants station. From there, follow the instructions above to get to Zenit Borrell hotel in the center of Barcelona. 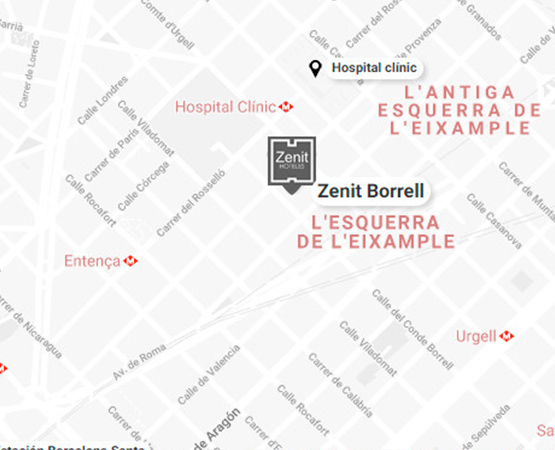 Discover the advantages of our Club Zenit

Subscribe to Zenit Club and start enjoying these offers and other exclusive benefits for members of Club Zenit.

TRANSLATION INTO OTHER LANGUAGE

Don´t you find the website in your language? Don´t worry . Now we are going to understand us better.
Open the dropdown and select your language!

We use the following cookies on WWW.ZENITHOTELES.COM to improve your customer experience:

These cookies allow us to count visits and traffic sources in order to evaluate and improve the performance of the site. In addition, we also use cookies designed to improve the accuracy of the adverts that you see. Google third-party cookies.